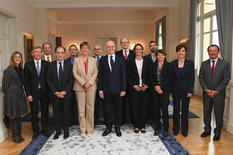 During the session the Council’s President, Pierre-André Chiappori, first gave an overview of recent developments at IMSEE, highlighting the appointment of Sophie Vincent as Director of the Institute in February this year, as well as the re-election of the Scientific Council, four* of whose eleven members were newly appointed in October 2018 for a term of three years. These changes mark a new chapter for IMSEE, which plays an important role in the Principality, particularly in the context of public policymaking.

Sophie Vincent then discussed the studies which have been carried out on key topics for Monaco:

-                  A survey on addictions and lifestyles among young people, which was finalised in partnership with the Department of Education, Youth and Sport;

-                  Demographic studies and studies measuring gender pay gaps and violence against women, which were requested by the Prince’s Government.

The members of the Council then shared their areas of interest and drew up new recommendations on the statistics to be developed and the actions to be implemented in order to build an effective statistical system.

At the end of the meeting, Serge Telle hosted a lunch for participants.

The Scientific Council for Statistics and Economic Studies provides advice to the Minister of State, who guarantees the Council’s independence. It takes a view on the studies to be carried out, the state of the statistical system and the annual survey programme. Its 11 members are drawn from civil society, assemblies and the Administration.

* Dominique Bureau, Chief Representative of the French Economic Council for Sustainable Development, Chair of the French Committee for the Green Economy and President of the French Public Statistics Authority; Caroline Rougaignon, Chair of the Economic and Social Council; Séverine Canis, Director of Forward Studies, Urban Planning and Mobility; and Pierre Van Klaveren, member of the National Council. 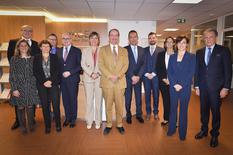