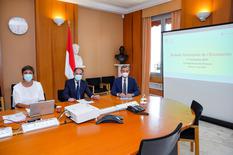 Minister of Finance and Economy Jean Castellini, Minister of Health and Social Affairs Didier Gamerdinger and Director of the Monegasque Institute for Statistics and Economic Studies (IMSEE) Sophie Vincent recently presented an analysis of economic performance during the first quarter of 2021 to the press, based on the Quarterly Economy Bulletin published by IMSEE.

The first quarter of the year continued to be affected by the pandemic and the health measures to contain it that were in place both nationally and internationally. Nonetheless, the maintenance of economic activity in the Principality, which, unlike its European neighbours, did not impose another lockdown, has helped to cushion the decline in some figures.

In addition, as Sophie Vincent highlighted, caution should be exercised when making comparisons with the first quarter of 2020, given the very different contexts of the two periods. Last year, only March was affected by the crisis, but there was a complete cessation of activity for the last two weeks of the month. This year, business has not stopped, but has been impacted by the health restrictions throughout the period.

- With regard to foreign trade, total trade (excluding France) has increased by 13%, buoyed by a recovery in exports (+26.7%).

- During Q1 2021, revenue, excluding financial and insurance activities, was €3.22 billion, down €259 million (-7.4%). Only four major economic sectors saw an increase in revenue, however these increases failed to offset the decline in accommodation and food service activities (-40.1%), real estate activities (-41.3%) and scientific and technical activities, administrative and support services (-16.2%).

- The balance of new businesses started minus businesses which closed shrank sharply. Fewer businesses were started (-10.6%) but the number of businesses closed also fell, though to a lesser extent.

- Unsurprisingly, hotel performance continues to be affected by the pandemic, and the hotel occupancy rate for the quarter was 20.2%.

- The real estate market has experienced a decline in both sales and resales, despite the recovery in March.

- In the transport sector, air traffic has fallen sharply, with a 70.7% decline in passenger numbers and a 58.8% drop in flights. Use of public car parks has also fallen (-6%), however registrations of new vehicles are up by 18.2%.

The two ministers were optimistic about the Principality’s economic recovery. “There has certainly been an economic downturn in the first quarter, but there are grounds to remain positive, because the economy has shown itself to be resilient and strong. The second quarter will certainly see a recovery. The key to this will be, we hope, very strong tourist activity, as tourists return along with major events and conventions,” emphasised Jean Castellini.

Didier Gamerdinger added: “in May, the number of jobseekers fell, as did the number of employees on strengthened provisions for total temporary layoff (22%). This is an encouraging sign of the beginnings of a recovery.”

The Economy Bulletin is online at www.imsee.mc

Visit to Monaco by the Junior Chamber International 2022 World President

A Monegasque delegation travels to Strasbourg for the MONEYVAL evaluation