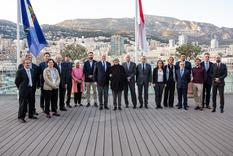 As part of Monaco Ocean Week (MOW), Monaco Scientific Centre, and specifically its WHO Collaborating Centre led by Professor Rampal, organised a workshop on ocean pollution and human health on Wednesday 27 March, in collaboration with Professor Philip Landrigan from Boston College, Coordinator of the Lancet Commission on pollution and health.

H.S.H. the Sovereign Prince and H.E. Mr Bernard Fautrier, Vice-President and Chief Executive Officer of the Prince Albert II Foundation, were there to hear the workshop’s conclusions and meet the various participants.

During the day, a review was launched with the aim of producing a special report by the time MOW 2020 is held. The report will be disseminated during a scientific symposium on “Human Health and the Ocean in a Changing World”, organised by Monaco Scientific Centre, in collaboration with WHO and other partners, from 11 to 13 May 2020 in the Principality.

The 14 participants, who included marine biologists, doctors, and/or representatives of international organisations, took part in presentations on various types of pollution and their impact on human health. They then broke into working groups, each of which will tackle a specific type of pollutant for the special report (plastics, heavy metals, persistent organic pollutants, pesticides and biological pollutants such as toxic algae and microorganisms).

This special report, which is supported by the Prince Albert II Foundation, will be produced by Monaco Scientific Centre and Boston College, in partnership with a number of selected scientists from around the world.

It will feature a systematic review of the impact of ocean pollution on human health, focusing particularly on vulnerable groups. The report will critically analyse current understanding of each pollutant that is likely to affect human health, examine the influence of climate change on these effects and attempt to predict future trends. It will also include economic data. Concurrently with its release in Monaco in May 2020, the report will also be published in a high-level peer-reviewed journal.