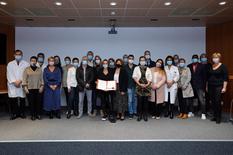 On Wednesday 10 November, officials and healthcare staff gathered at Princess Grace Hospital (CHPG) to celebrate the tenth anniversary of the Hospital Partnership programme. The programme brings together public health institutions in partner countries of Monaco’s Official Development Assistance with their peers in the Principality.

This anniversary commemorates the agreements signed in 2010 between the Prince’s Government, Princess Grace Hospital, the Monaco Institute of Sports Medicine and Surgery (IM2S), the Monaco Cardiothoracic Centre and the Monaco Medical Imaging Centre (CIMM).

The programme contributes to the achievement of Sustainable Development Goal (SDG) 3, and its more specific target on training medical staff. It provides a structure for partnerships with public health institutions in partner countries of Monaco’s Official Development Assistance.

A large number of structured activities have been developed over the last decade, including surgical operations, staff training in the partner country or in the Principality, installation of new equipment and expert missions, in countries that are facing major public health challenges around issues such as universal health coverage, major pandemic preparedness and maternal and infant health.

Throughout this time, the Hospital Partnership has enabled the organisation of 57 missions in ten specialities and the hosting in Monaco of 54 trainees from eight countries. Nineteen healthcare facilities in countries supported by Monaco’s Department of International Cooperation have benefitted. In addition to sharing skills and experience, all of the speakers emphasised the strength of the links forged through the programme, which often go beyond the professional sphere. Healthcare workers, both trainees and trainers, also spoke, sharing what the programme has meant to them.

Thanks to the firm links established over the years between Monaco and the target countries, the future of the Partnership now lies in the ability of the trained staff to pass on their knowledge within their own countries and in other countries in their region, with support from the Department of International Cooperation. This trend is already underway: grants have been allocated to doctors in the Sahel region to enable them to complete a university diploma on sickle-cell disease in Bamako, nurses from Mali have been sent to the National Cardiology Centre in Nouakchott for training, and sickle-cell patients have received surgery at the Saint Camille Hospital in Ouagadougou.

Led by several Monegasque ministers as well as various healthcare institutions in the Principality, the Partnership makes it possible to work hand in hand with Monaco’s international solidarity organisations, such as the Monaco Red Cross and the charity Share, as well as with NGOs devoted to a specific medical field, such as Migotigo (cardiology) or AME International (gynaecology).