"No to Bullying" Day at School 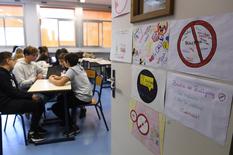 As in previous years, pupils from State schools and private schools under contract in the Principality played an active part in the 2019 "No to Bullying " Day at school.

The aim of this event is to give young people an opportunity to express themselves freely on this issue by inviting them to reflect on bullying, while informing them about ways to avoid it or put an end to it.

Various workshops were held throughout the day to raise everyone's awareness of the importance of this subject.  Thus, at the Collège Charles III, pupils from Years 7 and 10 worked in pairs on digital tablets, taking part in an interactive game in Spanish entitled "Protect your Image."

A choreographed interlingual show, featuring videos based on slogans created by Year 7 pupils, as well as a presentation by Year 10 pupils on the "Charter of Good Cyber Behaviour," produced with their technology and art teachers, enabled the pupils to better understand the various types of bullying in schools and learn how to deal with them.

The Prince's Government is particularly vigilant with regard to this issue, and relies on the Department of Education, Youth and Sport to prevent, detect and deal with cases of bullying in schools.  Awareness-raising sessions are held regularly in conjunction with the Action Innocence Monaco association.  Note that, in the context of a partnership with the Public Prosecution Department, the Senior Deputy Prosecutor and representatives from the Police Department address this issue with Years 8 and 11.