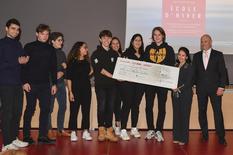 From 20 to 24 January, for the sixth consecutive year, the Department of International Cooperation (D.C.I.) held a "Winter School" at the Middle East-Mediterranean Campus of the Sciences Po Paris in Menton.  The aim of this week-long school was to raise awareness among first-year students and inspire their career choices.

The theme this year was "Development Cooperation and Rights in the MENA* Region."  The Winter School was therefore a unique opportunity to inspire career choices among its future leaders and promote Monaco's image of solidarity.  Mr Laurent Anselmi, Minister of Foreign Affairs and Cooperation, emphasised this in his closing speech, stating that "Monaco is not an island suspended outside time and space, but a nation that is deeply connected to others and committed to topical issues.  [...] The territory is fragile and sensitive to environmental impacts, thus driving the Principality to take action for sustainable development, both within its borders and internationally."

Once again this year, Monaco's Official Development Assistance invited its high-level partners to work with approximately 140 first year students from more than 40 nationalities at the Sciences Po campus in Menton.  The students were thus given an introduction to International Humanitarian Law by Frédéric Joli, from the International Committee of the Red Cross, the Right to Food by Geneviève Wills, from the United Nations World Food Programme, and Refugee Law by Rita-Flora Kevorkian, from the Lebanon Office of the United Nations High Commissioner for Refugees.

An innovation for 2020 was a creative solidarity challenge, which took place throughout the week.  The students, grouped together in teams, had to create a visual aid (such as a film, poster, short sketch, etc.) to promote the various rights discussed.  The money raised from the students' participation in this competition will benefit partner associations of Monaco's Official Development Assistance; the prize money will be donated to these associations.

To close this 6th Winter School, Yemeni director Khadija Al-Salami shared her experience of shooting her documentary film "Yemen:  Children and War," which was screened for the occasion in the presence of Mr Anselmi.  The amount allocated to the Jury's Grand Prize for the Creative Challenge will be donated to the director's foundation, and will be used to support the education of girls in Yemen.