Monaco supplies IT equipment for Lebanese Ministry of Public Health 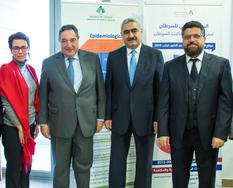 On Monday 10 December, an official handover of IT equipment for the Primary Health Care Department and the 185 primary health care centres around the country was organised at the Lebanese Ministry of Public Health. The aim of this initiative is to help improve universal health coverage.

The Principality was represented at the handover by Mr Bechara El Khoury, the Monegasque Consul in Lebanon, who expressed the Prince’s Government’s satisfaction at being able to support the Lebanese Ministry of Public Health through this project. He also noted that public health was the priority for Monaco’s Official Development Assistance in Lebanon, with particular attention paid to maternal and child health in vulnerable areas.

Dr Raghed Assi, the United Nations Development Programme (UNDP) Social and Local Development Programme Manager, who also attended the handover, said: “This contribution is appreciated by both UNDP and the beneficiaries. The primary health care centres are on the frontlines when it comes to managing the impact of the Syrian crisis on Lebanon. We would like to thank the Principality of Monaco for all of its support, and we hope that we can work together again in 2019.”

The handover represents the culmination of a project initiated in 2014 by the UNDP in Lebanon, with the support of Monaco’s Department of International Cooperation, titled “Putting in place integrated plans and services for wellbeing and health”.