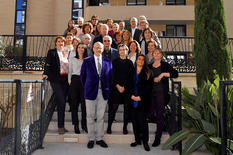 On Tuesday 5 March 2019, members of the Monaco Humanitarian Collective (charities, treatment centres and the Prince’s Government) held their annual meeting. The outcomes of the Collective’s work are very encouraging. Since the project was launched in 2008, 395 children, primarily from Africa, have received surgery in the Principality for cardiac and some orthopaedic conditions which could not be treated in their own countries.

In 2018, 39 children were treated thanks to the efforts of the Monaco Humanitarian Collective. Among the very active members of this solidarity network, gratitude is due to the voluntary organisations responsible for providing care for the children, Rencontres Africaines, the Monaco Red Cross, and Aviation Sans Frontières (Aviation Without Borders), which provides transport for the children, not forgetting the three partner treatment centres: the Monaco Cardiothoracic Centre, the Monaco Institute of Sports Medicine and Surgery (IM2S), and Princess Grace Hospital (CHPG).

The latter institution came in for particular praise at this year’s annual meeting, with members underlining the critical role played by the hospital. CHPG carries out surgery to treat arrhythmias, with operations performed by Professor Saoudi and his team. Where necessary, the hospital also treats children who have received surgery in the other partner centres for any other diseases from which they might be suffering.

Finally, the Department of International Cooperation, which leads this project, took advantage of the annual meeting to thank the generous and loyal donors to the Monaco Humanitarian Collective. In 2018, the Collective received more than EUR 517,000 from H.S.H. the Sovereign Prince – funds raised as part of his sixtieth birthday celebrations – as well as donations from individual donors like footballer Olivier Giroud, the Collective’s Ambassador, and charity organisations which are members of the Collective (Children and Future, the second largest donor since 2008 thanks to the contribution from the No Finish Line event, the Monaco Red Cross, AMADE, Amitiés Sans Frontières, Monaco Aide et Présence and Pagani Elia).