Installation of an Innovative Mobile Photovoltaic Unit in Madagascar

On 11 April, an innovative, autonomous, photovoltaic mobile unit was inaugurated in one of the Akamasoa Association's villages, founded by Father Pedro Opeka.  The inauguration took place in the presence of the French Ambassador to Madagascar and the country coordinator from Monaco's Official Development Assistance. 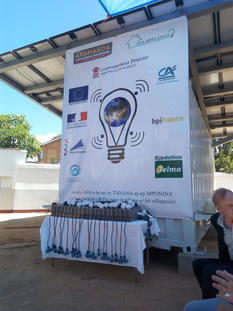 This mobile photovoltaic unit will provide access to electricity, lighting, a source of drinking water, the Internet and a refrigeration system for storing pharmaceutical and basic necessities for the 72 families of the village of Antolojanahary and the 1,400 pupils in its schools.

This initiative is part of Father Pedro Opeka's "Return to Earth" pilot project, the aim of which is to encourage an "urban exodus" of vulnerable families to the countryside.

The operation was led by Solarplexus from Réunion, a pioneer in the field of renewable energy on the Island

Monaco's Official Development Assistance wished to support this project in view of the reputation of Father Pedro Opeka's work in Madagascar and the very close relations he has enjoyed with the Principality of Monaco for many years.  To this end, Monaco's Official Development Assistance undertook a feasibility and relevance study last year, with the support of the Energy Assistance Monaco association.

The project was carried out in optimum conditions and Father Pedro has already expressed his satisfaction and gratitude to the Prince's Government.