Civil Protection: Two Malian Fire and Emergency Services in Training in the Principality 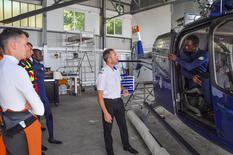 From 9 to 13 September, Staff Sergeants Gourdo Maïga and Massa Traoré from the Malian Fire and Emergency Service were present in the Principality to perfect their water rescue training and techniques with their Monegasque counterparts.  This training ended on Friday 13 September with an exercise involving a jump into the sea from a helicopter.

Mali is faced with drownings in the rivers that cross it.  This exchange is in line with the provisions of the Memorandum of Understanding for the period of 2019-2020, signed last March by the Government of the Principality of Monaco and the Government of the Republic of Mali, following a mission undertaken in 2018 in Bamako by Colonel Tony Varo, Supreme Commander of the Military Force.

As a reminder, in April 2019, two members of the Monaco Fire and Emergency Service – Warrant Officer Luc Trapinaud and Corporal Gildas Brunel – carried out a mission in the Malian capital, Bamako, in connection with the Memorandum of Understanding, with the aim of training 15 drivers of fire-fighting vehicles.

In addition to training courses, the Agreement provides for the financing of a training centre for the Malian National School of Civil Protection, which hosts 500 or so new recruits each year, as well as the sending of equipment and machinery and the purchasing of equipment.

Cooperation with Mali's General Directorate of Civil Protection was initiated in 2014, with support to the Baco Djicoroni emergency centre.  Since early 2019, Mali has taken part, alongside Burkina Faso and Mauritania, in the flagship "civil protection" programme organised by the development cooperation of the Prince's Government, in close partnership with the Monaco Fire and Emergency Service.