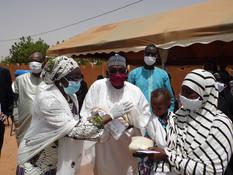 Launch of the blanket feeding initiative in Niger © Adamou Issoufou

During 2020, a year marked by the COVID-19 pandemic, the Prince’s Government’s Department of International Cooperation has introduced a special system of emergency aid in its partner countries* to support hard-hit vulnerable populations.

In addition to the clear health risks that the pandemic causes in countries with inadequate and fragile health systems, it is also having a devastating impact on economies that are heavily dependent on the informal sector. The current crisis has left millions of people who were already suffering severe hardship as a result of other difficulties significantly poorer and more vulnerable.

“In spring, the Principality was able to react quickly and offer partners financial assistance not just to prevent the epidemic but also to help counteract the effects of the lockdown in partner countries. We are known for being a reliable and loyal public donor who works closely with the most destitute,” says Bénédicte Schutz, Director of International Cooperation.

“Monaco, one of the richest countries in the world, is also facing a financial and economic shock due to this pandemic. Nonetheless, it was unthinkable that we would not demonstrate solidarity during this period of global crisis, particularly since health is the primary focus of our cooperation efforts,” stressed Laurent Anselmi, Minister of Foreign Affairs and Cooperation.

In 2020, the Prince’s Government has thus granted nearly €3 million in response to various international and national appeals including partner countries of Monaco’s Official Development Assistance program. Notably, two thirds of emergency COVID aid has been allocated to the seven least developed countries.

In response to an appeal launched by the United Nations Secretary-General, António Guterres, some ten emergency aid payments were made to UN bodies such as the UN Refugee Agency and the World Food Programme. This aid helped to support a pandemic prevention programme in Burundi, to assist extremely vulnerable Syrian refugee families in Lebanon and to purchase locally produced masks for target communities in Niger.

The Principality also answered a European Commission appeal on the global pandemic response, making a financial commitment of €1 million to Gavi, the Vaccine Alliance, and to the World Health Organization (WHO).

Special aid payments have also been made to international solidary organisations in the Principality, and to local and international partners.