Working visit to Monaco by the EU's Counter-Terrorism Coordinator 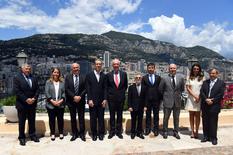 Gilles de Kerchove, the European Union's Counter-Terrorism Coordinator, paid a working visit to the Principality on 14 and 15 June 2018.

This visit was an opportunity for the highest Monegasque authorities to present the Principality's commitment to combating terrorism and the various actions undertaken at both the national and international levels, as well as to study the various avenues for strengthening Monaco's cooperation with the European authorities with regard to security.

Mr. de Kerchove was received in an audience by H.S.H. the Sovereign Prince and was invited by the Minister of State to a working lunch, in his Residence, with several members of the Government.

The judicial aspect of the fight against terrorism was discussed in a meeting with Laurent Anselmi, Secretary of Justice, and several judges.

The EU Coordinator also met with various administrative departments.  He took part in a meeting held at the premises of the Police Department on police cooperation and surveillance in this field, in the presence of Patrice Cellario, Minister of the Interior, and Richard Marangoni, Police Commissioner.

The Principality's international commitments to combating terrorism, including the illicit trafficking of cultural property and the financing of terrorism, were central to the discussions at a meeting chaired by Gilles Tonelli, Minister for Foreign Affairs and Cooperation.

During this working visit, Gilles de Kerchove gave a lecture at the Hôtel Hermitage, organised by the Monaco Mediterranean Foundation, on the subject of "New Challenges in Combating Terrorism for Europe and its Neighbours."