Song of the Whale makes port of call in Monaco 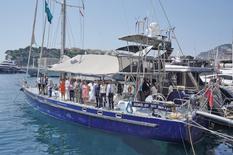 Minister of Public Works, the Environment and Urban Development Ms Marie-Pierre Gramaglia visited the Song of the Whale, one of the key vessels in the ACCOBAMS Survey Initiative, on Thursday 19 July 2018, accompanied by numerous other notable figures. The event was organised by the ACCOBAMS Permanent Secretariat, the Prince Albert II Foundation and the International Fund for Animal Welfare (IFAW) as part of the ship’s port of call in Monaco, where ACCOBAMS’ headquarters is located.

The initial results of observations showing the distribution of cetaceans and images from this ambitious project were then presented during a conference held at the Yacht Club. Participants also had an opportunity to learn about the scientific protocol for the regional survey, to listen to recordings of the sounds made by cetaceans during the study, and to hear accounts from the scientific observers on board the vessel.

The ACCOBAMS Survey Initiative is an innovative and unprecedented project which aims to improve conservation measures in the Mediterranean in order to safeguard its biodiversity.

As part of this effort, during June and July the Permanent Secretariat of the Agreement on the Conservation of Cetaceans of the Black Sea, Mediterranean Sea and Contiguous Atlantic Area (ACCOBAMS) is carrying out the first survey of cetaceans and megafauna in the Mediterranean, using eight aircraft, five boats, including the Song of the Whale, and around 100 scientific observers from all over the Mediterranean Basin.