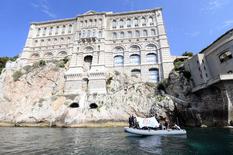 On Sunday 5 August 2018, at the instigation of the RAMOGE Agreement, which is encouraging the public to get involved and help scientists to better understand the distribution of certain protected species, the Monaco Underwater Exploration Club and the Department of the Environment joined forces and good will to conduct a census of noble pen shells (Pinna nobilis).

These large Mediterranean bivalve molluscs are usually found in Neptune grass. They are vulnerable to anchoring and bottom-fishing gear, and classified as an endangered species under Annex II of the Barcelona Convention’s Specially Protected Areas and Biodiversity Protocol.

The atmosphere was warm and friendly as 15 or so members of the diving club turned up to contribute to this participatory science initiative, which involved counting and describing the state of the noble pen shells.

The Department of the Environment, which led the initiative, opted to explore the zone located to the right of the Rocher cliff, between the Oceanographic Museum of Monaco and the entrance to the Port of Fontvieille, in order to obtain useful data about the status of bivalve populations. Divers were equipped with a slate and table to enable them to note useful information as they made their observations.

The results proved encouraging: 199 healthy specimens were identified within the zone covered. The presence of protected species such as the brown meagre, grouper, ribbed Mediterranean limpet and Pinna nobilis is an indicator of good ecological health in the environment.

A more detailed analysis will be conducted by the Department of the Environment.

The RAMOGE Agreement Secretariat thanks all volunteers for their generous collaboration and looks forward to seeing them again for a future participatory science initiative.