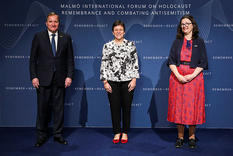 Director-General of the Ministry of Foreign Affairs and Cooperation Isabelle Rosabrunetto represented the Principality of Monaco at the Malmö International Forum on Holocaust Remembrance and Combating Antisemitism on 13 October.

Initiated by Sweden, which will take over the presidency of the International Holocaust Remembrance Alliance (IHRA) in 2022, the Forum was attended by numerous dignitaries from the world of politics, as well as from civil society – Jewish teachers, foundations and associations, and representatives of the Roma.

Discussions at the Forum, whose theme was “Remember Re-Act”, focused primarily on how to preserve the memory and the stories of the last survivors, and pass them on to new generations.

At the event, Charles Michel, President of the European Council, noted the launch, on 5 October, of the first European strategy to combat antisemitism and support Jewish life in the face of rising antisemitism and other forms of racism in Europe.

Recalling that “the Holocaust began with words”, the issue of online hate speech was a key theme of debate. TikTok, Facebook and Google presented their commitments to providing social networks which communicate clear and documented information and have zero tolerance for deniers and hate speech.

Like many of the states attending the Malmö Forum, Monaco presented its commitments to supporting efforts to commemorate the Holocaust and combat racism and intolerance. The Principality will continue its investment in education, a key tool in preventing antisemitism and encouraging people to live alongside each other, will perpetuate the memory of people who were deported, will provide regular support to the Auschwitz-Birkenau Foundation, and will enable access to historical documents for research.

For more information: the World Jewish Congress, in collaboration with UNESCO, has created aboutholocaust.org to provide the world with the essential facts about the Holocaust.