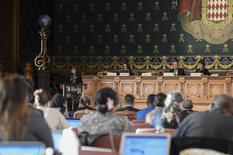 The 3rd Meeting of the Signatories to the Memorandum of Understanding on the Conservation of Migratory Sharks, organised by the Ministry of Foreign Affairs and Cooperation, was opened at the Monaco Oceanographic Museum on Monday 10 December by the Ministry’s Director General, Isabelle Rosabrunetto. Robert Calcagno, CEO of the Oceanographic Institute, Albert I, Prince of Monaco Foundation, was elected to chair the meeting.

In her welcome speech, Ms Rosabrunetto emphasised that “Monaco’s commitment to sustainable management of the oceans, seas and their resources makes the country a natural ally for international organisations whose mission is to safeguard biodiversity. [...] It was with this in mind that in 2011, it was considered appropriate for the Government to sign the memorandum of understanding on sharks.”

The meeting will continue until Friday, during which time representatives from the 48 signatories, including the European Union, will take part in work aimed at evaluating the conservation plan adopted at the last session in 2016. The 150 experts in attendance will also have to consider the need to designate new species of migratory shark that should benefit from stronger conservation measures.

Under the aegis of the Convention on the Conservation of Migratory Species of Wild Animals (CMS), the Memorandum of Understanding on the Conservation of Migratory Sharks is the first instrument dedicated to the protection of sharks. It seeks to achieve and maintain a favourable conservation status for these species, based on the best available scientific information and taking into account their socio-economic value.

Through its awareness activities, including those undertaken by the Oceanographic Museum, the Principality plays an active role in conservation efforts for these endangered species.

It is estimated that between 60 and 270 million sharks are killed each year.