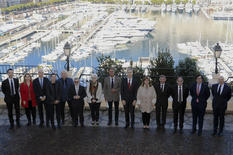 The visit, organised at the initiative of Monaco’s Permanent Representation to the European Union in Brussels, is aimed at giving the European MEP an overview of the Principality and its distinct geographic and demographic features, as well as the unique aspects of its institutions, economy and society, to enable him to gain an understanding of the realities faced by Monegasque nationals, residents and businesses.

With this in mind, following a working lunch at the Residence of H.E. the Minister of State with government ministers and the Secretary of Justice, Mr López Aguilar will complete a guided tour of the Principality and will attend, among other things, meetings with Monegasque institutions (see attached programme).

It is worth noting that Mr López Aguilar previously visited Andorra in October and San Marino in November 2018.