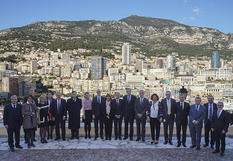 The eighth meeting of the Commission for Local Cross-Border Cooperation between France and Monaco was held on 11 January 2019 at the Ministry of State of the Principality of Monaco.

Established in 2005, the commission meets annually, alternating between Nice and Monaco. Its role is to consider practical questions that affect the Principality of Monaco and the local authorities in the Alpes-Maritimes region as neighbours, particularly as regards social, health, transport, development and environmental issues, in the spirit of the “common destiny” shared by the two countries.

The meeting was co-chaired by H.E. Mr Serge Telle, Minister of State of the Principality of Monaco, H.E. Ms Marine de Carné-Trécesson, France’s Ambassador to Monaco, and Mr Georges-François Leclerc, Prefect of the Alpes-Maritimes.

The Monegasque delegation* comprised members of the Prince’s Government, while the French delegation** included representatives from the French Embassy in Monaco and from the Alpes-Maritimes Prefecture, as well as elected officials.

The agenda included the issue of access to Monaco, a key concern, and the authorities together reviewed options for improvements. To this end, progress towards reopening the motorway exit slip road at Beausoleil was discussed as well as the headway made on improving junctions on the Moyenne Corniche road. The talks also covered alternative forms of transport, such as creating a link by sea, and improving coordination between national police forces on managing rush hour traffic.

In addition, the commission held constructive discussions about the La Cruella quarry development project, housing for workers and the introduction of teleworking for employees of Monegasque companies who are resident in France.

The commission welcomed the good progress made on technical safety improvements for the Rainier III tunnel and the delegations agreed to speed up efforts to secure governmental approval for the work in order to provide increased safety for travellers.

A number of topics associated with the activities being developed by Monegasque companies in France were also discussed, as well as the integration of Monaco’s Institute of Nurse Training with ParcourSup, the French national higher education admission platform, for 2019–2020.

The commission expressed its satisfaction with the successful implementation of the digital partnership signed by the Principality of Monaco and the Métropole Nice Côte d’Azur in 2015, and discussed other plans for cross-border cooperation.

There was also a presentation on the progress of Monaco’s offshore urban extension project. Work on this project began in 2016 and is set to be fully completed in 2025.

Considerable progress was made in a number of areas, and those which cannot be resolved at the local level will be reviewed by the national Franco-Monegasque joint commission when it meets in Paris during 2019.

The two delegations agreed to hold the next meeting of the commission in Nice in 2020.