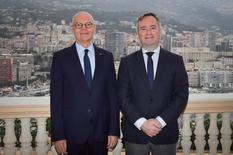 In the margins of the 36th Ministerial Conference of La Francophonie, which is currently underway in the Principality, Serge Telle this morning received Jean-Baptiste Lemoyne, Secretary of State to the French Minister of Europe and Foreign Affairs.*

The meeting provided an opportunity to discuss several of the subjects which are central to debate during the 36th Ministerial Conference, including ways to improve and modernise governance within the International Organisation of La Francophonie (IOF) and its bodies, as well as the challenges presented by digital and audiovisual technology in the French-speaking world. Other subjects were also addressed, such as the negotiations to reach an association agreement between Monaco and the European Union.

Mr Lemoyne thanked the Monegasque authorities for organising the 36th Ministerial Conference, which came at an important time for the IOF as it prepares to celebrate its fiftieth anniversary at the Tunis Summit in 2020.

* The following also attended the meeting:

-          Ms Isabelle Costa, Deputy Secretary-General of the Government in charge of the EU Coordination Unit