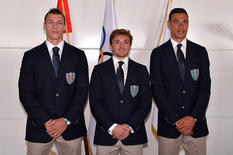 The names of the three athletes who will represent the Principality of Monaco at the next Olympic Games in Rio de Janeiro (Brazil) were recently announced by H.S.H. the Sovereign Prince. They are:

-        Kevin Crovetto – gymnastics (it is worth noting that Monaco was last represented in gymnastics at the 1920 Olympics in Antwerp);

-        Yann Siccardi – judo. Mr Siccardi will also have the honour of carrying the flag for the Monegasque team. The Monegasque judoka competed at the Beijing Olympics in 2008 and in London in 2012, when he finished ninth in his category.

The ceremony, which opened with a minute’s silence in memory of the victims of the 14 July attack in Nice, was attended by H.S.H. Princess Charlene, H.E. Ms Yvette Lambin-Berti, Secretary-General of the Monegasque Olympic Committee, and numerous personalities from the Principality.

T.S.H. the Prince and Princess of Monaco are both former Olympians themselves, and H.S.H. the Sovereign Prince has been a member of the International Olympic Committee since 1985.