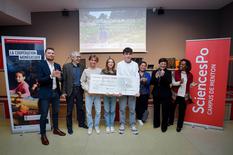 From 16 to 20 January, the Department of International Cooperation is holding its traditional Winter School for first-year students at the Sciences Po Middle East-Mediterranean Campus in Menton. Now in its ninth consecutive year, this week-long series of events aims to raise awareness and inspire vocations among the students.

Since 2015, Monaco’s Department of International Cooperation has been bringing together its partners, all experts in their fields, to work with students at the Sciences Po campus in Menton. The Winter School is a unique opportunity to instil vocations in these future leaders, while highlighting Monaco’s commitment to solidarity.

Lucile Marbeau and Frédéric Joli from the International Committee of the Red Cross gave an introduction to international humanitarian law to the 180 students representing some 50 different nationalities. The students also had a chance to meet some former International Volunteers of Monaco, who came to talk about their work. They had the opportunity to discuss the right to food with Robert Oliver, World Food Programme representative in Mauritania, refugee rights with François Reybet-Degat, the United Nations High Commissioner for Refugees representative in Morocco, and children’s rights with Jean Dzene from the Apprentis d’Auteuil Foundation. Yann Dutertre, Director of the Bioforce Dakar Centre, gave an overview of careers in humanitarian and development work.

The NGO Handicap International also contributed, with founder Dr Jean-Baptiste Richardier discussing the rights of people with disabilities, and Senior Advocacy Advisor Baptiste Chapuis addressing the EWIPA campaign against the use of explosive weapons in populated areas.

A creative solidarity challenge ran throughout the week. Teams of students created visuals for the five themes covered (children’s rights, the right to food, refugee rights, women’s/girls’ rights and the rights of people with disabilities), competing on behalf of partner associations of Monaco’s Department of International Cooperation, to whom the prizes awarded will be donated.

Isabelle Rosabrunetto, Director-General of the Ministry of Foreign Affairs and Cooperation, awarded the prizes to the students then brought the ninth Winter School to a close by noting that “a rights-based approach (...) is the very foundation of the humanitarian principles of neutrality, impartiality, humanity and independence. Such an approach is rooted in the Universal Declaration of Human Rights, which will celebrate its 75th anniversary this year and which is, more than ever, in need of defence.”