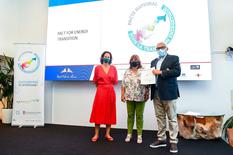 The Yacht Club de Monaco has made a number of commitments on the energy transition, with a particular focus on mobility. The Club is promoting sustainable mobility solutions to its members and the yachting industry more broadly, through means such as the Monaco Energy Boat Challenge and the SEA Index. The Monaco Energy Boat Challenge promotes the use of hydrogen, heat recovery, solar panels and wind power. This year, 32 teams including 22 universities from all over the world, are taking part in the race, with a total of 350 participants, more than 200 of them students. The SEA Index is a benchmark that aims to measure the environmental impact of yachts measuring more than 40 metres in length (in terms of design and use). It is intended to become a fully transparent global standard offering an assessment of the energy impact of large yachts.

In a similar vein, a round table on hydrogen organised by the Yacht Club de Monaco, the Prince Albert II Foundation and the Mission for Energy Transition was held at 10 a.m. on Friday 9 July. The agenda featured a discussion among Monegasque and French institutions and leaders of international hydrogen projects and the aim was to address the issue of developing hydrogen for maritime and transport use.

The Yacht Club also hosted a responsible yachting event organised by the Mission for Energy Transition to celebrate World Oceans Day in June, at which Bernard D’Alessandri said: “Monaco, the yachting capital, must position itself as a port of excellence.” He also noted that the use of combustion engine vessels for schoolchildren would soon be discontinued in favour of electric boats.

As is the case for every National Pact signatory, a review will be carried out in a year’s time to see what the Yacht Club de Monaco has done to reduce its carbon footprint.