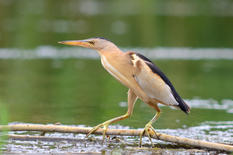 Every year, the Department of the Environment conducts numerous environmental monitoring missions throughout the country, covering fish, shellfish, birds, insects and plants.

On the night of 24 May, during a herpetological survey – a census of reptiles and amphibians – a new migratory bird was discovered in the Japanese Garden: a small male little bittern (Ixobrychus minutus), a migratory bird considered to be the smallest European heron.

The little bittern has not previously been observed in the Principality, despite the fact that birds of this species regularly make a stop in the region from May before leaving in August or September to return to their winter habitat in sub-Saharan Africa.

The bird’s presence in the Japanese Garden is likely due to the fact that it is a wetland (the species’ preferred area) which is home to the right kind of animal life for it to feed on (frogs and insects). Since the garden is closed at night, it also offers the bird the calm it needs to rest and hunt. 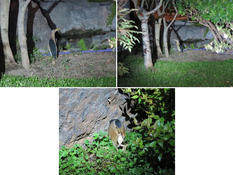 Little bitterns are found throughout Central and Southern Europe, North Africa and Western Asia. Studies carried out on the species show that its numbers have declined significantly right across Europe due to changes in or the disappearance of its habitats and traditional stopping or intermediate points. An endangered species in Europe, it has been listed in Annex 1 of the European Birds Directive.

How to recognise the little bittern

The adult male has black plumage with a green sheen from the top of the head (crown) to above the tail. The sides of its head and neck are a light ochre-yellow colour and it has two white median stripes that are difficult to see.

The female has a black cap and brown edging. Its back and shoulders are a chocolate-brown colour with yellowish borders. The sides of its neck have brown marks and its flanks are streaked dark brown.