The National Council Makes a Commitment to Energy Transition 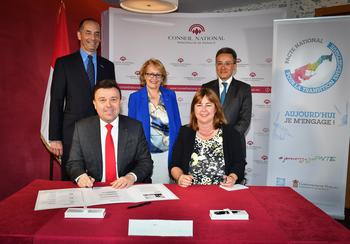 Stéphane Valeri signing the Charter of Commitment to the National Pact on Energy Transition with Marie-Pierre Gramaglia.  At the back, from left to right:  Fabrice Notari, President of the "Environment and Quality of Life" Commission of the National Council, Brigitte Boccone-Pagès, Vice-President of the Institution and Jean-Luc Nguyen, Director of the Mission for Energy Transition.

Today, Stéphane Valeri, President of the National Council, signed the Charter of Commitment to the National Pact on Energy Transition on behalf of the High Assembly of the Principality and in the presence of Marie-Pierre Gramaglia, Minister of Public Works, the Environment and Urban Development.  The aim for the Institution is to make a commitment to a carbon-neutral Monaco.

As a reminder, the aim of the National Pact, which was implemented last January, is to involve the Monegasque community, in order to achieve the objectives of reducing greenhouse gas emissions by 50% by 2030 in comparison with 1990 and achieve carbon neutrality by 2050.

The National Pact consists of a Charter of Commitment, which sets out the three priorities for energy transition:  mobility, waste and energy.  There are also a dozen sectoral action plans (for institutions, individuals, hotels, businesses, developers, architects, industries, etc.) that propose obligatory actions to be taken as a minimum, which are clearly associated with avoiding greenhouse gases.  In this way, everyone can become aware of what can be achieved on a practical level in their field.

H.S.H. the Sovereign Prince, followed by His Government, was the first signatory of the National Pact, which now has nearly 400 members.

This topic can be followed on Monaco Info and on our social networks.

Further information on membership of the Pact:  http://transition-energetique.gouv.mc/Pacte-National-pour-la-Transition-Energetique/Comment-adherer-au-Pacte