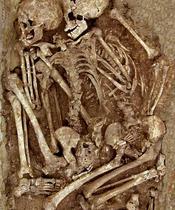 Two-person sepulchre, an adolescent male and an elderly woman, found in the Chrildren's Cave in Grimaldi, M.A.P.M. Collection

The Balzi Rossi caves are located in the village of Grimaldi, in the Italian municipality of Ventimiglia. It is in this collection of caves that the remains of a small woman (dating from the end of the Upper Paleolithic age) were found. Then, buried more deeply under this sepulchre, the remains of a large Cro-Magnon man (who would later become the Grimaldi Man) were also found, as well as a two-person sepulchre holding an adolescent male and an elderly woman. This practice, which was observed during the Upper Paleolithic age, thus dates the relics to 25, 000 years old.

True to his scientific personality, Prince Albert I invested personally into palaeontology, leading excavations and founding, in addition to the Institut de paléontologie humaine in Paris, the Museum of Prehistoric Anthropology in Monaco in order to preserve, draw attention to and study the results of the excavation campaigns into the Grimaldi caves.