Treaties of Burgos and Tordesillas

Lucien Grimaldi was assassinated in 1523 by his nephew, Barthélemy Doria. At the same time, his uncle Andrea Doria fled from Genoa, which had fallen into the hands of Charles Quint. He was probably trying to take control over Monaco, as his war galleys were anchored in the port at the time of the assassination. Though the loyalty of the people caused the plot to fail, the murder remained unpunished despite instructions given by the king of France, François I. This was probably due to the power of Andrea Doria’s position, which likely influenced the situation. Augustin, the brother of Lucien, succeeded him to the throne and was disappointed by France’s limited support. Under the pressure of his Genoese cousins, he turned to Charles Quint, the powerful Spanish sovereign, who was in the most suitable position to guarantee Monaco’s independence. The Spanish governor of Genoa convinced Charles Quint of the strategic importance of Monaco’s position. The treaty of Burgos was signed on 7 June 1524 and Charles Quint recognised the independence of Monaco in November.

Charles Quint stayed in Monaco on his way to Bologna, where he was going to be crowned by the Pope. 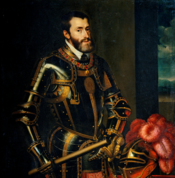 Portrait of Charles Quint by Rubens, copy by Titian