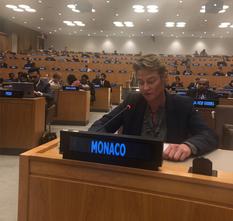 Clotilde Ferry, Counsellor at Monaco’s Permanent Representation to the United Nations, discussed the rights of the child at a meeting of the United Nations Committee on Social, Humanitarian and Cultural Issues held on 10 October 2018 during the 73rd session of the General Assembly in New York.

Having noted the target set 16 years ago by the committee “to build a world fit for children”, Ms Ferry used her speech to highlight that the situation for children around the world was getting worse in terms of both armed conflicts and access to education and healthcare.

She noted H.R.H. the Princess of Hanover’s commitment to reintegrate child victims of armed conflict and the Principality of Monaco’s support for the Security Council resolutions on the fate of children during periods of conflict and, in particular, for the Safe Schools Declaration.

The Counsellor also stressed the various actions taken by the Principality to promote and protect children’s rights, calling attention to: