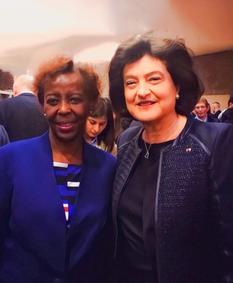 On Monday 18 March, Monaco’s Permanent Representation to UNESCO took part in an “Evening of Flavours” to mark International Francophonie Day. The evening was organised by the President of the UNESCO Francophone Group,

UNESCO Director General Ms Audrey Azoulay and Secretary-General of the International Organisation of La Francophonie Ms Louise Mushikiwabo both helped to launch the festivities. Three winners of the “My thesis in 180 seconds” competition then presented the results of their scientific research.

At the invitation of H.E. Mr Michelet, who is also Swiss Ambassador and Permanent Representative to UNESCO, nearly 30 countries took part in the event and showcased their culinary specialities.

At the Monaco Stand, the various countries’ representatives to UNESCO and their guests had an opportunity to taste some Monegasque specialities accompanied by Bière de Monaco beer.