UN: Monaco participates in 57th Session of the Commission for Social Development 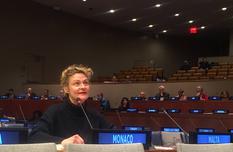 Ms Clotilde Ferry, Counsellor at the Principality of Monaco’s Permanent Representation to the United Nations ©DR

On Tuesday 19 February, Ms Clotilde Ferry, Counsellor at the Principality of Monaco’s Permanent Representation to the United Nations, took part in the 57th Session of the Commission for Social Development. The theme for the 2019 session was “addressing inequalities and challenges to social inclusion through fiscal, wage and social protection policies.” In her speech, Ms Ferry set out the specific actions that the Principality is taking to reduce inequalities and tackle social exclusion.

At the national level, she noted the Monaco Youth and Sustainable Development Meetings, which provide an opportunity to empower school pupils in the Principality and raise their awareness of the importance of the energy transition and sustainable development. Ms Ferry also mentioned the Committee for Graduate Employment which, since 2010, has helped 236 young people find their place in Monaco’s economy.

In health care, an area which is vital to the Principality and to which it devotes 8% of the national budget, the charities Monaco Disease Power and A.M.A.P.E.I. support the Prince’s Government’s efforts to promote social inclusion for people with disabilities.

Finally, Ms Ferry highlighted the country’s international cooperation activities, particularly those focused on boosting entrepreneurship in developing countries through the use of microloans, and the actions of the Monaco Red Cross, which is heavily involved in supporting the socio-economic integration of young people.