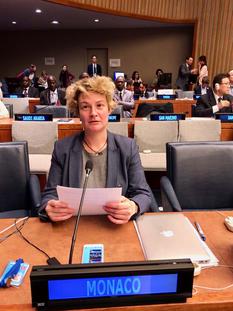 Clothilde Ferry, Counsellor at the Permanent Mission of Monaco to the United Nations Organization in New York ©DR

For the first time, Monaco took part in the meeting of States Parties to the Convention on the Rights of Persons with Disabilities.  This 11th session was held in New York from 12 to 14 June 2018.

At this meeting, the UN Secretary-General, H.E. Mr. António Guterres, recalled that the Convention on the Rights of Persons with Disabilities, which this year is celebrating the tenth anniversary of its entry into force, protects the human rights of approximately 1.5 billion people with disabilities worldwide.

The theme of this session, "Leaving no one behind through the full implementation of the CRPD" was an opportunity for the Principality to promote its inclusive social and economic policies, the aim of which is to enable people with disabilities to participate fully in the daily life of their country.

Monaco also participated in the election of nine new experts who will serve on the Committee on the Rights of Persons with Disabilities for a four-year term (2019-2022).