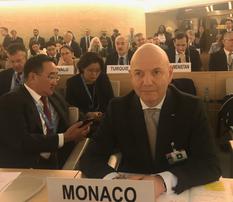 On Monday 24 February, Mr. Laurent Anselmi, Minister of Foreign Affairs and Cooperation, took part in a meeting of the Alliance for Multilateralism, held at the Palace of Nations, the headquarters of the United Nations Office at Geneva.  The Principality is associated with this Franco-German initiative, which was launched in April 2019.  It consists of an appeal to the community of nations to strengthen international law and humanitarian action on the basis of shared principles, with a broad scope of application (the humanitarian consequences of armed conflicts, climate change and disasters, violations of gender equality and the right to dignity, cyber crime, etc.).

At this meeting, Mr. Anselmi met with Mr. Jean-Yves Le Drian, Minister of Europe and Foreign Affairs of the French Republic.

This meeting began with a high-level segment, during which Heads of State, Ministers and senior UN dignitaries reviewed the human rights situation in the world.  At this meeting, the Secretary-General of the UN, Mr. Antonio Guterres, launched a seven-point appeal for action to strengthen the involvement of the Organization and its Member States in promoting and protecting human rights.

During this session, the last contribution of the UN Special Rapporteur on Human Rights and the Environment, Mr. David Boyd, will be presented; the Principality has been providing financial support to his mandate since 2019.  Monaco is also co-sponsoring a side event on the subject of this report, to be held on Friday 28 February.