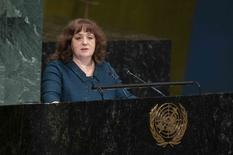 Welcoming the re-election of Yukiya Amano as Director General of the International Atomic Energy Agency (IAEA), H.E. Ms Isabelle Picco, Ambassador and Permanent Representative of the Principality of Monaco to the United Nations, took the opportunity of the UN General Assembly’s review of the IAEA’s report on 9 November to highlight the positive contribution made by the Agency on a daily basis through the use of atomic energy for peaceful purposes and the application of nuclear techniques in scientific research and climate protection.

H.E. Ms Picco recalled that the Principality had hosted the IAEA Environment Laboratories since 1961. For the last 20 years, the Laboratories have been located on Port Hercule, where the Ocean Acidification International Coordination Centre was also established in 2012.

In collaboration with the Monaco Scientific Centre, these bodies are working to assess the socio-economic impacts of ocean acidification, including by means of international workshops that bring together experts and scientists from around the world.