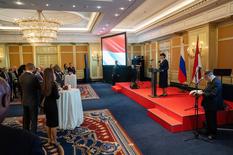 To mark Monaco's National Day, H.E. Ms Mireille Pettiti, Ambassador of the Principality of Monaco to the Russian Federation, held a diplomatic reception in Moscow.

Almost 150 people attended this evening event, which took place at the Ritz Carlton Hotel in Moscow. Among the guests were many Ambassadors who are accredited to the Russian Federation, partners of the Embassy and representatives of the Ministry of Foreign Affairs, as well as high-ranking Russian dignitaries, including Alexander Pankin, Deputy Minister of Foreign Affairs.

In her address, the Ambassador recalled the events held by the Principality of Monaco on Russian territory over the past year. She also gave an update on Monaco's actions and positions with regard to combating global warming and protecting the oceans. 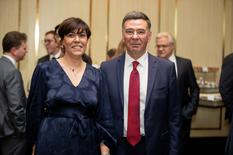