Reception in Brussels on the Occasion the Anniversary of the Accession of H.S.H. the Sovereign Prince On 27 June 2019, in Brussels, H.E. Ms. Sophie Thevenoux, Ambassador of the Principality of Monaco to the Kingdom of Belgium and Head of the Mission to the European Union, and Mr. Marc Thevenoux, celebrated the anniversary of the Accession of H.S.H. the Sovereign Prince by holding a reception in the prestigious setting of the Villa Empain.

More than 250 guests attended and expressed their wishes of Health and Happiness to H.S.H. the Sovereign Prince and His Family.

The annual consular meeting took place in the morning, chaired by the Ambassador.  The agenda of the meeting was devoted to an overview of Monegasque current events and the activities of Monaco's Consuls in Belgium, the Netherlands and Luxembourg.

The highlight of this consular meeting was a presentation of the Monegasque tax system and the Principality's international commitments in this respect by Mr. Thierry Orsini, Director General of the Ministry of Finance and Economy. 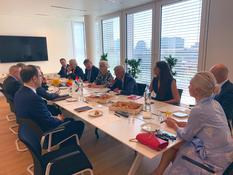