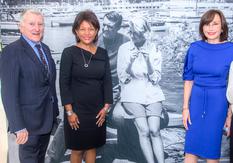 To mark the ninetieth anniversary of the birth of Princess Grace, Monaco’s Embassy in Washington, D.C., held a private screening of one of the Princess’s greatest films, Alfred Hitchcock’s masterpiece To Catch a Thief, at the Motion Picture Association (MPA) Theatre on 29 October. The screening was followed by a reception at the Ambassador’s residence, attended by more than a hundred guests.

In his welcome speech, the Chairman of the Princess Grace Foundation – USA, the Honourable John Lehman, talked about Princess Grace’s cultural and philanthropic legacy: “The Foundation was established by Prince Rainier III in the year Princess Grace died. The greatest tribute that he could pay to her was to continue her work dedicated to helping young artists financially and to sponsoring their entry into the world of the performing arts: dance, cinema and theatre.”

“We are celebrating her artistic heritage on the day she would have celebrated her ninetieth birthday,” added H.E. Maguy Maccario Doyle, Monaco’s Ambassador to the United States, addressing the guests who attended the screening, which was organised with the cooperation of Ambassador Charles Rivkin, Chairman of the MPA and a former US Ambassador to France and Monaco. “Through her films, Grace Kelly, Princess of Monaco, remains eternally young and beautiful. We have some very affectionate memories of the Princess, and particularly her generosity of heart and of spirit, her tireless support for charitable causes and her passion for culture and the arts, which is perpetuated through her Foundation...”

Ms DeDe Lea, Executive Vice President, Global Public Policy and Government Relations at Viacom, Paramount Pictures’ parent company, introduced the screening by noting that “To Catch a Thief is a Paramount film and, honestly, it is still one of my favourites. Princess Grace holds a special place in my heart because we were both born on 12 November!”

The evening brought together businesspeople, philanthropists and diplomats, including H.E. Anne de la Blache, the French Ambassador to the Organization of American States, Brisa Trinchero, CEO of the Princess Grace Foundation – USA, senior officials from the US Department of State, and ambassadors and diplomats from the European Union, Ireland, Pakistan and Morocco. The Washington Ballet was also represented by Artistic Director Julie Kent and the company’s principal dancer Gian Carlo Perez, who received a Princess Grace Foundation fellowship in 2017. 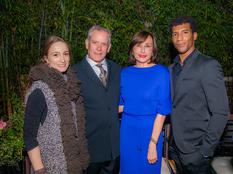