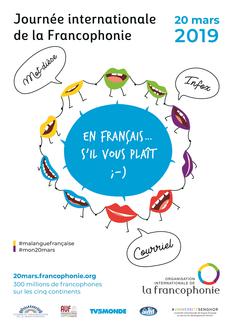 The annual global celebration of International Francophonie Day will take place on 20 March 2019, when 220 million French speakers across five continents will honour their shared language and the diversity of the French-speaking world.

The date was chosen to commemorate the founding in Niamey (Niger) on 20 March 1970 of the Agency for Cultural and Technical Cooperation (ACCT), which would go on to become the International Organisation of La Francophonie (IOF).

The theme for this year’s celebration, in which the Principality of Monaco is involved, is: “En français... s’il vous plait ;-)” (“In French, if you please ;-)”).

The Principality has been a longstanding member of the IOF since 1970 and plays an active role in the work of the organisation.

In October 2018, in the margins of the 35th Ministerial Conference of La Francophonie in Yerevan (Armenia), the Prince’s Government signed two funding agreements covering the duration of the new IOF programming period (2019–2022), underlining its consistent commitment to the Francophone family:

*: One million euros over four years in addition to Monaco’s statutory contribution
as a member state

In October 2019, the Principality will host the 36th Ministerial Conference of La Francophonie, for which the theme will be: “Reconciling Humanity and the Planet: Prospects within the French-Speaking World as the IOF Turns 50”.