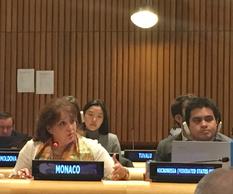 H. E. Ms. Isabelle Picco, Ambassador, Permanent Representative of the Principality of Monaco to the United Nations, took part in the Legal Affairs Committee, which was held on 18 October 2018 in New York.

The Ambassador also took the opportunity to acknowledge the long-standing cooperation between the Monaco Red Cross, which is celebrating its 70th anniversary this year, and the International Committee of the Red Cross (ICRC), which bears witness to the Principality's commitment to the respect for international humanitarian law, human rights and basic humanitarian principles.