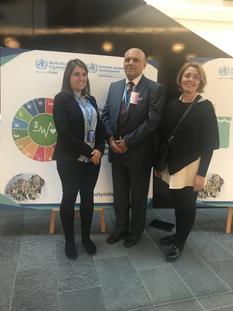 A Monegasque delegation, headed by H.E. Ms. Carole Lanteri, Ambassador, Permanent Representative of Monaco to the United Nations Office at Geneva, accompanied by Mr. Alexandre Bordero, Director of Health Affairs and Ms. Suzana Vaz, Attaché at the Permanent Mission of Monaco in Geneva, took part in the World Health Organization's 69th session of the Regional Committee for Europe, held from 16 to 19 September 2019 in Copenhagen.

The main focus of this session was the appointment of the WHO's new Regional Director for Europe.  The successor to Ms. Zsuzsanna Jakab, as chosen by the Regional Committee, is Dr. Kluge, who will take office in early 2020, for five years.

In addition to this appointment, during the four days of debate, the Regional Committee examined various health issues that are of importance to the European Region, such as the lessons that have been learned since 2012 from the implementation of the 2020 Health Programme, as well as the promotion of health equity, the implementation of primary healthcare throughout the region and financial, budgetary and administrative issues.

As a reminder, the Regional Committee for Europe meets annually to discuss health issues of interest to the European region.