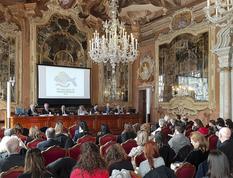 H.E. Mr. Robert Fillon, Ambassador of Monaco to Italy, was invited to speak at a multidisciplinary colloquium organised by the Honorary Consul of France in Venice, Ms. Marie-Christine Jamet, to celebrate and raise awareness of Francophonie in Italy.

The conference took place at Ca'Foscari University of Venice and focused on a variety of themes, including institutional Francophonie, the place of French language teaching in Italy, the recognition of cultural diversity and translation matters.  This working session, aimed in particular at students of the University, brought together diplomats, writers, translators, educators and historians.

In his speech, H.E. Mr. Fillon recalled the steps and issues that led to the establishment of the International Organisation of La Francophonie as it exists today.  In particular, he emphasised the role and priorities of the Principality with regard to its participation in the joint work of States and Governments that "share the French language."