Monaco Attends the 39th Session of the Human Rights Council 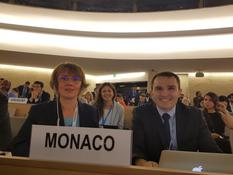 H.E. Ambassador Carole Lanteri, Permanent Representative of the Principality to the United Nations Office in Geneva, attended the opening of the 39th session of the Human Rights Council, which is being held at the Palais des Nations from Monday 10 September until 28 September.

At this meeting, the Human Rights Council heard the first speech by Ms. Michelle Bachelet, the former President of Chile, who took up her new post as United Nations High Commissioner for Human Rights on 1 September 2018.  After paying tribute to Mr. Kofi Annan (the former UN Secretary-General, who died on 18 August) and his predecessor, Mr. Zeid Ra'ad Al-Hussein, Ms. Bachelet addressed some of the challenges facing the international community with regard to promoting and protecting human rights and highlighted the interaction between human rights and major global issues such as climate change and development.  Ms. Bachelet also mentioned several critical situations in which human rights are under threat or are being violated on all continents.

During the next three weeks, the Human Rights Council will consider thematic issues such as access to safe drinking water and sanitation, the rights of the elderly and the rights of indigenous peoples.  It will also address the human rights situation in a number of countries.