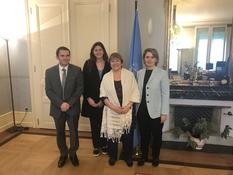 H.E. Ms Carole Lanteri, Ambassador and Permanent Representative of the Principality to the Office of the United Nations in Geneva, today paid a courtesy call on Ms Michelle Bachelet, the new United Nations High Commissioner for Human Rights.

During their meeting, the Ambassador and the High Commissioner discussed the Principality’s commitment to promoting and protecting human rights, particularly for the most vulnerable (children, women, people with disabilities, etc.). H.E. Ms Carole Lanteri also highlighted the cooperation initiated several years ago between the Prince’s Government and the Office of the High Commissioner. This involves, among other things, the payment of voluntary contributions, which reached a total of EUR 60,000 in 2018.

For her part, Ms Michelle Bachelet welcomed some of the new human rights developments in the Principality: the establishment in 2013 of the High Commission for the Protection of Rights, Liberties and for Mediation, and, more recently, the setting up of the Women’s Rights Committee. She also congratulated Monaco on the commitment shown by the country during the 3rd Universal Periodic Review on 12 November 2018.

Finally, the Ambassador and the High Commissioner discussed the various UN mechanisms for assessing national human rights policies (Committee on the Rights of the Child, Committee Against Torture, etc.), which are capable of exerting a positive impact on the development of practices and regulations within the countries under review.

The High Commissioner for Human Rights is appointed by the UN Secretary-General to lead the Office entrusted by the General Assembly with a mandate to promote and protect all human rights. To this end, the Office supports the implementation of international human rights standards on the ground, helps governments to fulfil their obligations, and encourages individuals to assert their rights. It also speaks out objectively on human rights violations throughout the world.