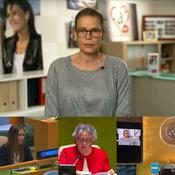 In a video message, H.S.H. Princess Stephanie called for lessons to be learned from the concurrent HIV and COVID-19 epidemics in order to build stronger health systems.  She welcomed the new UNAIDS global strategy, which focuses on reducing inequalities and on prevention, particularly for key populations, and recalled the financial support that Monaco has been providing to the programme for nearly 25 years.  She also cited her association "Fight Aids Monaco" and the commitment made in 2018, "Towards Monaco without AIDS."

The United Nations General Assembly's High-Level Meeting on HIV/AIDS ended with the adoption of the Political Declaration, an ambitious text with new targets to be met by 2025.

H.E. Ms. Isabelle Picco, Permanent Representative of the Principality of Monaco to the United Nations in New York, chaired the meeting in her capacity as Vice-President of the current General Assembly.