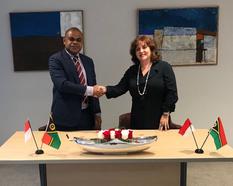 On 10 September 2018, the Republic of Vanuatu became the 139th state to establish diplomatic relations with the Principality of Monaco.

Permanent Representatives to the United Nations H.E. Mr Odo Tevi and H.E. Ms Isabelle Picco signed a joint communiqué in which the two nations committed to further developing the ties of friendship and cooperation between them.

Until 1980, this Pacific island state was unique in being jointly administered by two powers under a Franco-British condominium. French and English continue to operate as official languages alongside Bislama. In addition, the legal system is based on English and French law.

In establishing diplomatic relations with Vanuatu, Monaco is continuing to expand its links with small, developing island nations. The Principality shares many common positions with these states and works with them on issues including climate change, protecting the oceans, seas and their resources, and implementing the sustainable development agenda.