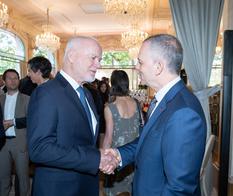 On 9 July 2019, the Ambassador of the Principality of Monaco to France celebrated the anniversary of the Accession of H.S.H. Prince Albert II of Monaco, at a reception held at the Pavillon Dauphine in Paris.

H.E. Mr. Christophe Steiner and his wife were host to more than 450 guests, including several former Ministers of the Republic, numerous Ambassadors accredited in France and the Principality of Monaco, Representatives of International Organisations based in France, members of the National Assembly and Senators, senior civil servants and members of ministerial cabinets, several prominent figures from the political, economic, judicial, scientific and cultural worlds and many Monegasques who live in Paris and the Ile-de-France.

In a message to the guests, H.E. Mr. Christophe Steiner made particular reference to several forthcoming important events to be held in Monaco, including the presentation, in September, of the IPCC's Special Report on the Ocean and Cryosphere in a Changing Climate, and, in October, the 36th Ministerial Conference of La Francophonie, which will propose that representatives of the Organisation's member countries debate the subject of "Reconciling Humanity and the Planet:  Perspectives in the French-Speaking World on the Eve of the 50th Anniversary of the OIF."

The Ambassador also welcomed the commitment of France, which currently holds the presidency of the G7, to making climate change one of its priorities.

This reception was preceded, in the morning, by a meeting of all the members of the Consular Corps of the Principality of Monaco in France.