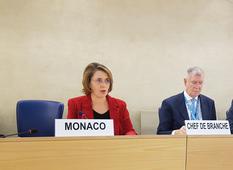 H.E. Ms Carole Lanteri, Ambassador and Permanent Representative of the Principality to the Office of the United Nations in Geneva © DR

On Thursday 14 March, H.E. Ms Carole Lanteri, Ambassador and Permanent Representative of the Principality to the Office of the United Nations in Geneva, took part in a meeting to consider the final report produced by the working group on the 3rd Universal Periodic Review (UPR) of Monaco. The meeting was held at the Palais des Nations in Geneva during the 40th Session of the Human Rights Council.

H.E. Ms Lanteri responded to the human rights recommendations made with respect to the Principality as part of the UPR, which was carried out in November 2018. The adoption of the report marked the end of this process and provided an opportunity to restate the Government’s commitment to promoting and protecting human rights.

Several member states offered their views on the report and welcomed the Principality’s commitment to human rights policies.

The UPR is a mechanism which was introduced within the framework of the UN Human Rights Council in 2006. It allows the Council’s member states and observers to review the human rights policies of their peers and to make recommendations about how they can be improved. All UN member states are subject to a UPR once every five years.