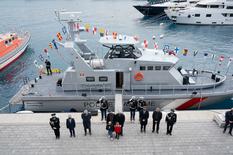 T.S.H. the Sovereign Prince and Princess Charlene, accompanied by their children, H.S.H. Hereditary Prince Jacques and H.S.H. Princess Gabriella, today attended the blessing of the new Marine and Airport Police Division launch, named the Princesse Gabriella. The blessing was given by Monseigneur David, and senior officials from the Principality were also in attendance.

H.S.H. Princess Gabriella, after whom the launch is named, released the cord holding the bottle (made of nougatine) which broke against the hull, as maritime tradition dictates. Sirens and foghorns rang out across the port to celebrate the naming. The vessel’s flag was then hoisted as a trumpet played the Monegasque national anthem. The ceremony concluded with a tour of the vessel by the Prince and his family.

The launch is 24 metres long, 5.6 metres wide and weighs 60 tonnes. It is capable of reaching a speed of 30 knots at full power and is equipped with two radars and a satellite link, as well as a crane with a capacity of 400 kilograms, a firefighting system and a mounted weapon. It will increase the Marine and Airport Police Division’s operational capacity and optimise port surveillance and sea rescue operations.