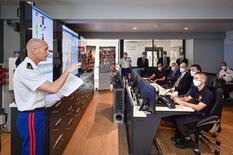 This centre will oversee the deployment and monitoring of emergency resources in conjunction with its various partners, such as the DPUM's  Integrated Mobility Management Centre, the Police Department's Monitoring and Operational Command Centre, the Emergency Department of the Princess Grace Hospital and Monaco City Hall, as concerns remote alarms.