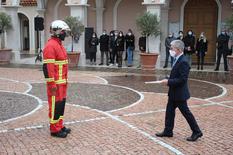 On Monday 26 October 2020, Monaco Fire and Emergency Service met in the Place du Campanin, Fontvieille, for a military ceremony to present operational helmets to young recruits and awards to deserving members of the Service who have recently distinguished themselves in major operations.

The ceremony took place under the authority of Lieutenant-Colonel Fassiaux, Head of the Service, in the presence of Mr. Patrice Cellario, Minister of Interior, and Colonel Tony Varo, Supreme Commander of the Military Force.

The highly symbolic presentation of the operational helmet by the patrons, watched by the recruits' families, is a solemn moment, marking the end of a five-month training course, which the eight young recruits of the "Commander Bagaglia intake" passed through with flying colours.  This momentous act symbolises their commitment and their membership of the Service.  It also bears witness to the fraternal bond that now unites them with their 143 brothers in arms, whom they will now join on missions to protect and safeguard the Principality.  They will share the Service's motto, "Courage - Devotion – Sacrifice."

In addition, and for the first time, Father Venard, Chaplain of the Fire and Emergency Service, blessed the helmets.

Finally, the ceremony continued with the presentation of awards to deserving personnel who had distinguished themselves in major operations.  At this ceremony, they were presented with testimonials of satisfaction from H.S.H. the Sovereign Prince, H.E. the Minister of State and the Supreme Commander of the Public Force, as well as letters of congratulation from the Head of the Fire and Emergency Service for fighting a fire in an enclosed car park on 15 January 2020 and a major fire in an apartment on 9 April. 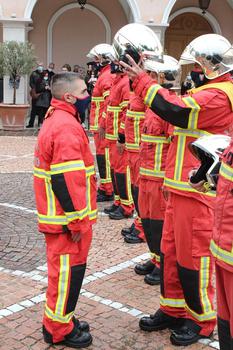 France and Monaco sign memorandum of understanding on combatting terrorism