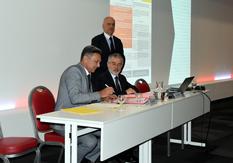 On Tuesday 18 June 2019, a conference was held in the Auditorium of Monaco's Vocational and Catering School (Lycée Technique et Hôtelier de Monaco), which focused on the partnership between professionals in the luxury sector, more specifically specialists in the watchmaking, jewellery retailing and jewellery-making trades, and the Police Department.

This meeting was chaired by Mr. Patrice Cellario, Minister of Interior, in the presence of Mr. Richard Marangoni, Director of the Police Department, and members of his staff.  At the end of the meeting, the Monaco Luxury Sector Security Committee was established.

The establishment of this Committee is part of the "Public Security 2020" plan.  Under this plan, the "Monaco, a Safe City" project calls for global reflection with a view to improving security criteria among the Principality's socio-economic partners, in order to develop a mutual relationship based on prevention.

In this regard, the Police Department has issued two safety recommendation charters (VIGILUX and VIGIEXPO), presented at the meeting.  A certificate, which is a real mark of quality in terms of security, will be issued to professionals who implement these recommendations.

Easing the Lockdown: Checks at the Monegasque Border

CORONAVIRUS : Lockdown extended to 3 May inclusive