A Delegation of Firefighters from Monaco Travels to Lugano 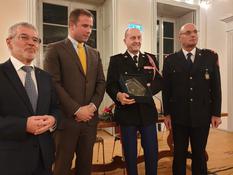 Fifteen years after the signing of a Twinning Agreement between the Monaco Fire and Emergency Service and the Lugano Fire Brigade*, a delegation visited Lugano in Ticino on Saturday 7 and Sunday 8 December.

This anniversary was an opportunity to highlight the quality of knowledge sharing and the development of exchanges between the two Corps in Operational Techniques, Prevention and Training.

Thus, over the past fifteen years, we recall, in particular, the visit of a delegation to discuss the safety measures and the arrangements put in place during the Grand Prix and e-Prix, a three-day seminar by the Swiss fire brigade, which brought together 16 Corps from the Swiss Federation, as well as the various and numerous shared training courses, for example in Perilous White Water Rescue and a simulation exercise of an accident in a canyon, not forgetting fire training, next January, for four officers from Lugano on Monaco Fire and Emergency Service's Simulator for Familiarisation with and Training in Smoke from Fires and Reconnaissance (S.A.F.F.F.I.RE)

*The Twinning Agreement between the Monaco Fire and Emergency Service and the Lugano Fire Brigade was signed on 18 June 2004.

CORONAVIRUS: restrictions on movement at night in Principality of Monaco from Sunday evening